printed in the Albert Lea Tribune and the Courier Sentinel the week of October 25, 2018 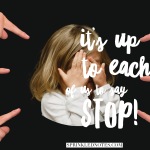 I feel old this week, not in terms of years but in terms of muddling through the social landscape. I do not recognize the country I grew up in. Incidents personally and in the news keep me shaking my head in lack of understanding, and I am feeling rage. Rage is not an emotion I have felt very often in my life.

A few events in the past year weigh heavily on my mind and my heart.

Three football players in the area savagely beat and injure one of their teammates who is left with lifelong brain injuries. The incident was filmed on their cellphone. This week it was in the news that the school board hired an investigator to determine whether the district’s actions in the aftermath were in compliance with the Minnesota State High School League. They were found in compliance. Case closed. The boys received minimal sentences for their part in the assault. Meanwhile, the victim and his family had to move out of state because of the friction of opinion in a small community. If you believe the news reports, the parents of the boys committing the assault felt the sentencing was too harsh and the words bandied about, at least in the papers, were “boys will be boys.”

Another scenario played out in another small Minnesota community nearby — a break-in at a home, an assault on a woman and a rape. The perpetrator was caught immediately, but then, of course, he was released on bail and the friends of this person threatened the lives of the victim so much they, too, had to move out of the community for their safety. It was yet another slap on the wrist, even though the intimidation continued.

Another close friend had this experience: The 15-year-old son was bullied, harassed and physically assaulted in their school to the point of injury because of their sexual orientation. They had to leave school to be safe and attend an online school.

And just last week a ninth-grade student commits suicide because of bullying. This young boy is gone, but the people who chose to make life miserable for another will live on to bully another day.

This past year I also did a series on domestic abuse. My friend CeeCee James described her life of abuse as a child in an abusive family. Neighbors knew teachers knew and other family members knew; however, no one spoke out — the silence of their inaction in my mind is deafening.

I see the bullying rhetoric online from adults when they don’t like something: They attack. I can’t help but wonder if these individuals were bullied growing up and haven’t escaped the cycle. Are they providing this environment for their children, which in turn leads to bullying in school because they know no different, and, when confronted, the parents don’t want to admit to it because they haven’t learned how to let go of their fear and anger?

I recently had a conversation with someone who is trying to confront their way of communicating instead of lashing out and calling names and being abusive; they are confronting their past. The person grew up with an abusive father and in looking at the children in the family, the legacy lived on in the way they communicate with others, including those they love. This person feels it is time to break the cycle, but they can’t do it without first taking responsibility for their actions.

In all of these cases, it is the victims who will live with this their entire lives. They have been sentenced; they had to leave their homes, communities, and schools, or they took their life to get away from the pain. And that fills me with rage. And it should fill you with rage, too.

We love our children, but we need to recognize they are not perfect; they will make mistakes, but to grow into an adult they also need to suffer the consequences of their actions so they can grow. We need to teach them bullying toward another is not accepted by anyone. There will be consequences.

You can’t also tell me, teachers, friends, and relatives do not know and recognize who these bullies are. Does it make a difference which side of the tracks you live on? Who you are in the communities and who you know that makes a difference in the belief and the punishment? Are we afraid to speak up because we might lose our jobs defending a student who needs defending? Or do we fear for our well-being if we say something? Ask yourself those questions.

I think a perfect sentence for bullies would not be jail, but years of service in homeless shelters where they would have to live and be under supervision, or mental health facilities, where they must confront those who have been hurt and help them. Not days, but months and years.

And maybe I will get a little political. As both Democrats and Republicans, we need to stand up in our parties and say, “This rhetoric of calling names, demeaning women, lying and being dishonest has to stop. That is not what our party is about, that is not how we want to raise our children, and we are not going to support you if you do this. There are others in our party who do live up to honesty and integrity, and we are going to elect them.”

Responsibility starts at the top and filters down to us as parents and grandparents to stop the pain, to stop the victim from being the one with the sentence. And if you don’t feel rage that all this is happening, then I don’t understand this country anymore.