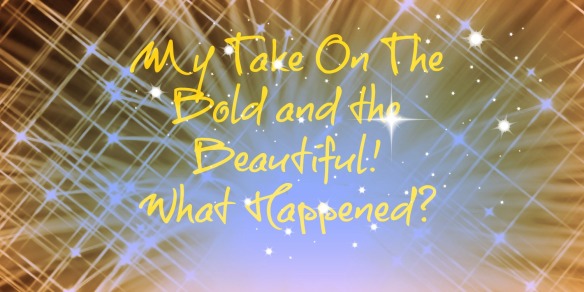 I don’t usually write posts on the soap operas I have watched for more years than I can count. At least it is that way with the Young and the Restless. I have followed the soap from the beginning. I began watching the Bold and the Beautiful when As The World Turns went off the air. Yes, I am a soap junkie starting from my teen years when my mom got me hooked. I won’t tell you how old I am now. Let’s just say almost older than dirt.

I will start by commenting on the Bold and the Beautiful. Since I have begun watching this soap, and I am not sure why I am watching anymore, it has pretty much consisted of Hope in love with Liam, Liam marrying Stephy, then divorcing Stephy and going back with Hope, and then back to Stephy and letting Stephy go, throwing  in a few more people for them to marry before they trade around again.

Then we have Ridge and Brooke. Ridge is with Brooke,  he marries someone else and back to Brooke, another distraction and then he is back with Brooke. You get my gist. In between, we have had a few other storylines like the one with Sheila coming back. I wasn’t in on the first times Sheila was in the mix but it was tiring having her come back again. You knew exactly what was going to happen. I really felt the mark was missed on the Quinn shooting too. The story could have been so much more.

I am a mystery writer and as a long time fan, I think I could even do better than what has happened. I was very hopeful when someone shot Bill and they had all these suspects. But then they ended the story quickly. My mystery writer mind had all kinds of twists and turns along with offshoot stories that could have kept us fans enticed for a long time. Add some history and the writers could have rocked it. But no, first the writers showed us Liam shot his father and then it was Taylor.  And I might add I have been very disappointed with the way the police are portrayed in this soap opera. It doesn’t do justice to what would really happen if crimes unfolded they way they did the past few months.

Elation bubbled over me when they brought the Spectra’s back but again it was quickly over and the writers dropped the ball not only on Bill’s involvement in trying to try to kill Sally and endangering Liam but also in the entire story that could have developed with Spectra and Forrester once again going head to head especially with Thomas helping Sally lead the battle.

Don’t get me wrong, I love the actors playing the characters. They are doing an excellent job with what they are given but I feel as if the Bold and the Beautiful are living in the movie Groundhog Day and every day is the same. Perhaps the problem is the writers and the networks are too young and not seasoned enough to understand what makes a soap great or what makes fans keep watching. Maybe they should hire a real author who spends their lives writing great stories.

Here is what I imagine in my head when I think of the Bold and the Beautiful. Liam and Wyatt actually finally say enough and start their own company to compete with Spencer Enterprises. Someone starts to sabotage Spencer Enterprises and of course Bill blames Liam and Wyatt but who is lurking from the past that could be the villain? Hope and Stephy finally both have had enough of Liam’s waffling between the two of them. Stephy becomes a single mother and though Liam will have a say in her child’s future, she doesn’t need a man to complete her. She is an independent woman and takes charge with her dad at Forrester. Hope takes time to figure out why she can’t move on and spends time figuring out who Hope Logan really is, maybe meeting someone new along the way that could take her in an entirely new direction. I feel this program shows a disrespect to these two characters who are supposed to be leading executives and strong women. Meanwhile, Liam and Wyatt also have someone sabotaging their efforts to start their new company. Both father and sons are too busy blaming each other to see what is really going on right under their noses.

Ridge and Brooke, Eric and Quinn become the stable couples although Quinn still has that impish spark inside of her and decides she is going to investigate who is trying to take down her son. Of course, her life might be put in danger but does she pull Eric into it too or does he still try to be the voice of reason?

We can’t forget about Pam and Charlie. They add a comedic touch to the show. As for Wyatt and Katie, well use your imagination and find a story for them so they don’t get boring. After all, they don’t do much right now as a couple except having trysts in Katie’s house or worry about what other people on the soap thnk of their relationship.

I know my storyline dreams might be lame but what I am saying is get off the same ole, same ole. A subject is talked about for days with not much action. It is very easy to fast forward through many conversations because there are not many surprises. Bring back some history. Tie the show together and add some mystery, strife, and comedy. Make us care about the stories and the characters. I might be wrong but it is time to find someone who truly understands the Forrester’s and is bold with the storyline and makes it a beautiful tale to weave.

Tomorrow my take on the Young and the Restless.

Who am I? Just a fan that wants my soap opera back. Is that too much to ask?

2 thoughts on “Young and the Restless, Bold and the Beautiful What Happened?”