Something About Nothing published in the Albert Lea a Tribune January 16, 2017

In 1963 at the March on Washington, Martin Luther King Jr. delivered his famous “I Have A Dream” speech in which he stated his wish that our nation would rise and live out the creed that we would hold our truths to be self evident and all men would be created equal. He wished for all to sit down in brotherhood and that his four children would live in a nation where people would be judged not by the color of their skin but by the content of their character. He wanted people to pray together, work together and stand up for freedom together. In spite of the oppression he felt over his lifetime, he loved this nation.

I was a senior in high school in 1968. That is 49 years ago. I never thought when I was a teenager that we would still be fighting the same race wars in 2016. I can only imagine what Dr. King would say if he would be able to speak today.

I grew up in a white community. I remember the first time I met a black person. It was in the early 1970s, and he was the husband of my best friend from childhood. It was the first time I was confronted with choosing whether I might be accepting of someone of another race, and I was. My friend made a smart choice in her husband. My children who were 3 and 5 at the time didn’t notice color — they noticed kindness. I had been sheltered from the violence and race wars where I lived and was relieved to know that I could look at a person and see the person not the race.

I think the reason I questioned how I would react to the meeting was because of what I had seen on television and heard in the media. Living where I lived I didn’t understand what the rest of the country was going through because I didn’t experience it, and so making judgements just by what I heard did put a little fear in my heart of those that were different.

I had a little taste of understanding earlier in 1968 when I read a book called “Freedom Summer” published in the ’60s. I don’t know the author, but the book had an impact on me. I read it for a book report my senior year. It highlighted white college students volunteering in Mississippi during the riots to register voters. I read it, went back to my nice life, but I never forgot that book.

I can’t imagine having the courage of Dr. King, speaking out and leading against hatred and violence that was directed at him. Yet he kept going and it cost him his life, but in doing so he left a legacy to aspire to. He believed in nonviolence and he preached nonviolence, yet violence took his life because he had the courage to stand up against those who were intolerant.

And I don’t like feeling that fear because for me, if fear takes over, the lashing out begins. The rational thinking goes out the door and my mind fuels on what might happen and is focused on things which might never occur except in my own mind. When that happens I take it out on those I don’t understand, and it leads to family against family, neighbor against neighbor and judgement and repercussions. The blaming begins and we never blame ourselves. We always find a scapegoat for our feelings.

I read the story of the life of Martin Luther King Jr. today. He deserves our honor. He gave his life so others could have a better life. He didn’t stay silent about oppression out of fear. I find others doing that today, staying silent out of fear, bowed down by those that are louder. Staying silent because they don’t want to be targeted by those that think differently. I find myself doing that or apologizing to those that are the loudest and don’t like my viewpoint, because I don’t want to offend them even when they are offending me or I don’t want to be their target. Where is the fine line between swallowing our pride and our beliefs and our conscience and still staying friends with those who bully our opinions so we don’t speak out?

We learn from the past. Soon we will be the past. What will our children learn from us? Will it be the same as we learned from Dr. Martin Luther King Jr.? Will it be an education of courage?

One thought on “The Courage Of A Leader” 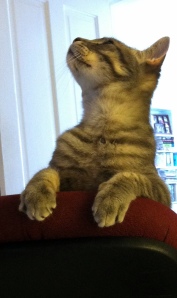